FCI standard of the Erdélyi Kopó 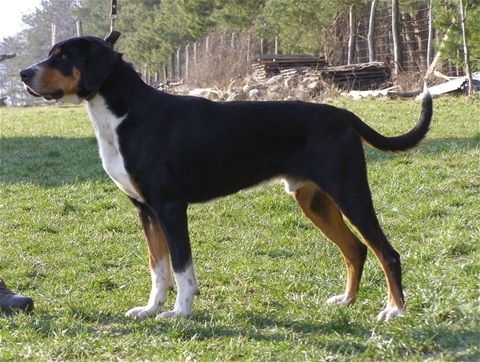 UTILISATION: Hunting Dog (Hound) which is able to hunt independently, also at a great distance from his handler. Excellently suited to the finding and pursuit of a trail. When he finds a fresh scent, he yaps with a whining sound; during the hunt giving tongue to the scent, his barking is resounding, high pitched and ringing. He drives and points game in an excellent manner. He works smoothly alone or being part of a brace.

BRIEF HISTORICAL SUMMARY: The Erdelyi Kopó is an ancient Hungarian breed, which has been determined by the peculiarities of the climate, the territory and the hunting conditions. The breed reached its climax in the Middle Ages, at a time when it was the favourite hunting dog of the aristocracy. Regarding its original use, it was pushed back into the path-less woods of the Carpathian mountains, due to the developments in agriculture and forestry. As a result of the influence of the various conditions of the terrain, two varieties of the Erdelyi Kopó evolved: the long legged and the short legged variety. These two varieties were always kept together.

Originally the long legged Hungarian Hound was used for hunting big game like buffaloes and later bears, wild boars and lynxes, while the short legged Hound was used for hunting small game like foxes or hares in overgrown terrain and chamois in rocky areas.   At the beginning of the 20th century, the Hungarian Hound was nearly extinct. The determined breeding was resumed in 1968. Nowadays a significant number of dogs of the long legged variety exists in Hungary and in the neighbouring Romania; the short legged variety disappeared.

GENERAL APPEARANCE: The shape and the carriage of the head, the body proportions, the strong muscular limbs and the tail set of the Hungarian Hound correspond to the characteristics of the Mid-European type of Hounds. It is medium sized. The body formation of the Hungarian Hound has adapted to the work over long distances. He is athletically built, neither coarse nor fine boned.

The ratio of the height at the withers to the length of the body is 10:11.

BEHAVIOUR / TEMPERAMENT: Good-natured, courageous, enduring. The basic character of the Hungarian Hound is quiet, even, but also determined and lively. He even stands extreme weather conditions.

HEAD: It is a longish but not pointed Hound head; the difference between the sexes is distinct.

CRANIAL REGION: The skin on the head is close-fitting and free of wrinkles.

Skull: Slightly domed. The occiput is not pronounced. The superciliary ridges are slightly developed.

Nose: The nose is not too bluntly cut off, the colour is black. The nostrils are mobile and wide.

Lips: Dry and tight fitting. The colour of the mucous membrane is black.

Jaws/Teeth: The jaws are strong. The teeth are strong and well developed. Complete scissor bite, according to the dentition formula.

Eyes: Of medium size, almond shaped, slightly oblique. The colour is dark brown. The lids are close-fitting to the eyeball.

Ears: Set medium high, not too heavy, hanging closely to the cheeks without being folded. They widen from the base and then taper towards the rounded tip. Pulled forwards, the leathers cover the eyes but normally do not reach further.

NECK: Very muscular, of medium length. The skin forms slight folds on the throat. A slight dewlap is permitted but not desirable.

BODY: The body has the shape of a prone rectangle.

Back: Straight behind the withers with well developed muscles.

Loin: In bitches a slightly longer loin is permitted.

Chest: The sternum does not protrude. The brisket is broad, long and not too deep. In cross section, it is oval, nearly rounded, to ensure easy breathing.

Underline and belly: Belly only slightly tucked up.

TAIL: Set on at medium height, strong. In repose, the lower third of the tail is curved slightly upwards. It reaches, preferably, one to two cm beyond the hocks. When excited, the dog carries his tail curved, yet not curled, over the back. The tail is not docked.

FOREQUARTERS: Seen from the front, the front legs are parallel and, as a result of the broad chest, adequately far apart.

Elbows: Close-fitting to the ribcage.

Forefeet: Large with well knit, strong, arched toes. The pads are large, firm and well cushioned. Nails are strong and as black as possible.

HINDQUARTERS: When standing, the hind legs are slightly overstretched beyond the rear; well muscled.

SKIN: The skin of the Hungarian Hound is medium thick. Especially in the throat region it is a little loose but never folded. It has a dark pigment. Bare areas of skin are black.

HAIR: The whole body, even the underside of the belly, is covered by short, straight, dense, flat coat. On the neck, the withers, the back of the upper thighs and the underside of the tail, the coat is longer than on the other parts of the body. Cow-licks and ridges may occur. The coat is coarse to the touch and shiny. Undercoat under the topcoat.

COLOUR: The primary colour of the Hungarian Hound is black. There is always a not too dark tan point on each eyebrow.

Tan markings on muzzle and legs. The tan is distinctly demarcated from the black. On the nose, a white marking may occur, possibly extending to a blaze on the forehead, to a collar around the neck, to the chest, under the chest and to the lower parts of the legs and the feet. A white marking may also occur on the tip of the tail. White on more than one fifth of the whole body is undesirable.

The decisive criterion is the overall balance rather than the mere measure in cm.

FAULTS: Any departure from the foregoing points should be considered a fault and the seriousness with which the fault should be regarded should be in exact proportion to its degree and its effect upon the health and welfare of the dog.

Any dog clearly showing physical or behavioural abnormalities shall be disqualified.